Assessment of Outcome of Hypospadias Repair

About 2 years ago, I operated on a child with distal hypospadias. When he saw me, he had one failed operation already (done elsewhere), with complete dehiscence of the repair. I performed a re-operation (redo hypospadias repair) on him, which was successful and the child is doing well; his penis looks like a normal, circumcised penis and he passes urine in a good straight stream without any leak (fistula) or any straining to pass urine. However, the parents were concerned about the outcome and whether everything is ok. I asked for a uroflowmetry test, which showed a good bell-curve and a peak flow of 11ml/sec. With this, I reassured them that their child is doing well. However, he needs to be on intermittent follow-up to ensure he continues to do well.

This brings us to the questions:

How do we assess the result of Hypospadias Repair?

Hypospadias surgery is both a cosmetic and a functional operation. After hypospadias repair, the penis should be straight, covered with good, healthy skin, and the penis should look like a normal, circumcised penis. Functionally, the child should be able to pass urine in a straight stream from the tip of the penis without any straining. For achieving a good functional result, it is important to reconstruct an adequate caliber urethra. When the hypospadias surgeon chooses the appropriate repair for the child, he/she should choose a technique that gives both acceptable cosmetic and functional results. Some recent     give more importance to cosmetic appearance but with compromised functional outcome. Since these techniques are easy to perform, they have become popular. However, with these operations, even though the external appearance of the penis may be good, the child may have a narrow urethra, resulting in difficulty in passing urine, pain, urinary infections and many other complications. Thus, the hypospadias surgeon should be well versed with many techniques of hypospadias repair so that these problems can be avoided.

The functional assessment after hypospadias repair starts by enquiring the mother about the child’s urination. If the child is passing urine comfortably in a single stream from the tip, without pain or straining, it indicates a good functional result. A simple ultrasound examination of the kidneys and bladder can also give some idea about the urinary function. In children older than 3 years of age, a simple, non-invasive testing called ‘uroflowmetry’ can be done. If the uroflow result is satisfactory, it indicates good functional result. Presently we routinely advise this test in all children older than 3 years after hypospadias repair.

There is no role of routine urethral calibration/dilatation (the practice of inserting silastic or metal dilators into the urethra in the outpatient clinic, which is practised routinely by some) after any hypospadias repair. This practice creates fear in the child and causes severe psychological trauma. In case the child has difficulty in passing urine or has straining during urination after hypospadias repair, and there is a doubt about narrowing of the urethra, gentle urethral calibration may be done under sedation and never in a conscious child.

When should we suspect a problem in a child who had previous Hypospadias Repair?

After hypospadias repair, if the child strains for urination, has pain during urination, has blood in the urine, or gets urinary infections, the parents should consult the surgeon. It takes about 3 months for near-complete healing after hypospadias repair, and minor symptoms may be there till the healing is complete. But if significant symptoms like straining for urination and pain persist after 3 months, it indicates some problem with the repair and needs to be taken seriously. 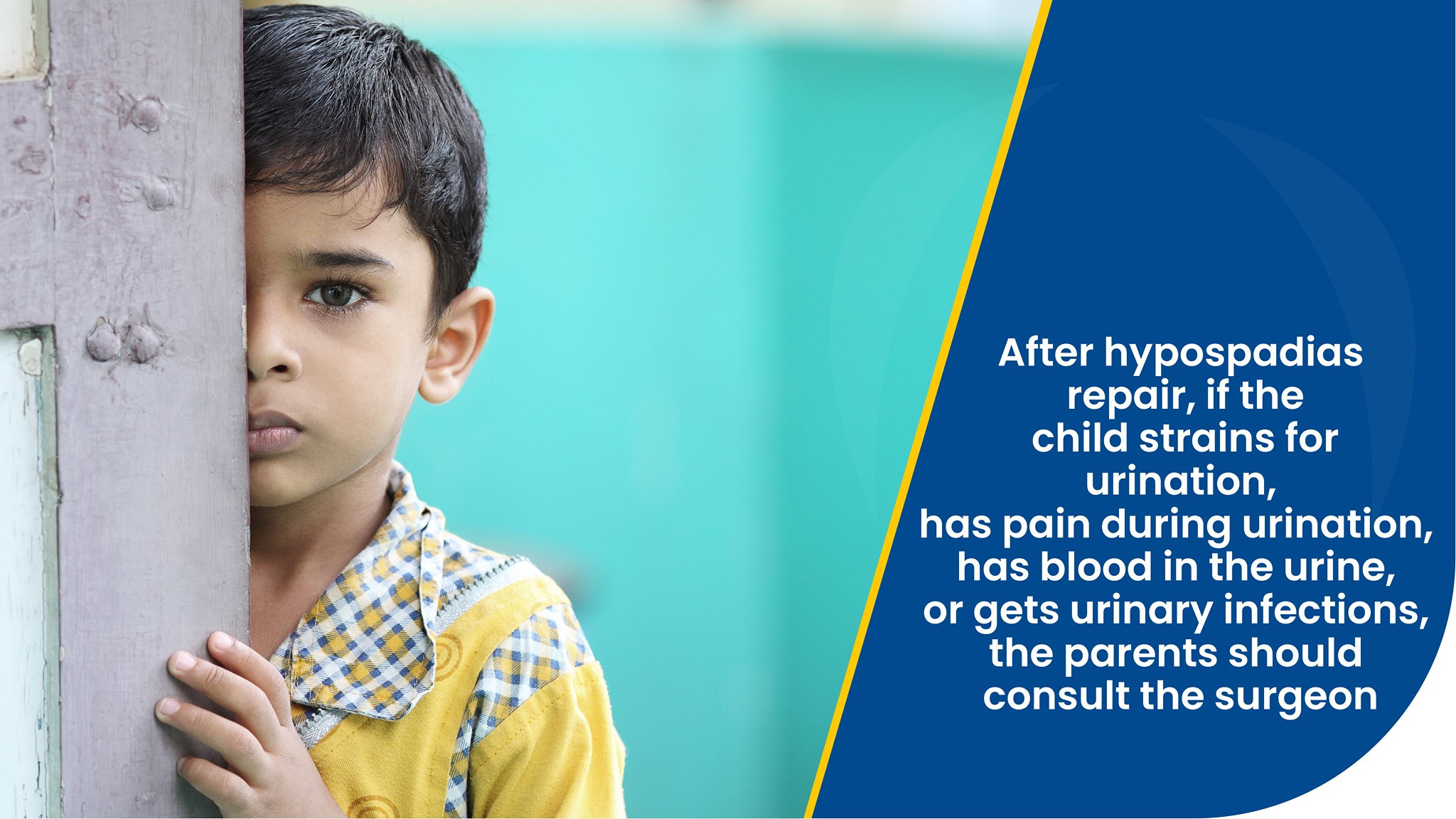 What is the long-term follow-up after Hypospadias repair?

Typically, the follow-up after hypospadias surgery is at 1-2 weeks, 1 month, 3 months, 6 months, 1 year and then yearly afterwards. It is important to follow the child at puberty when the external genitalia increase in size to make sure that the repair done during childhood is working fine.