Hypospadias is a common congenital defect. The severity of hypospadias varies in every child. Many hypospadias are mild or moderate variety, which means that the urinary opening is on the penile shaft and the chordee (downward bend of the penis) is <300. In such cases, the hypospadias defect can usually be repaired in a single operation. This means that correction of chordee (making the penis straight), urethroplasty (construction of the urinary tube to bring the urinary opening to the tip of the penis), glansplasty (reconstruction of the glans penis to give normal conical shape) and completing the final skin cover to the penis (all 4 steps in hypospadias repair) are completed in a single operation. In most cases, after hypospadias repair, the penis would look like a normal circumcised penis (a normal penis for which a circumcision has been done). 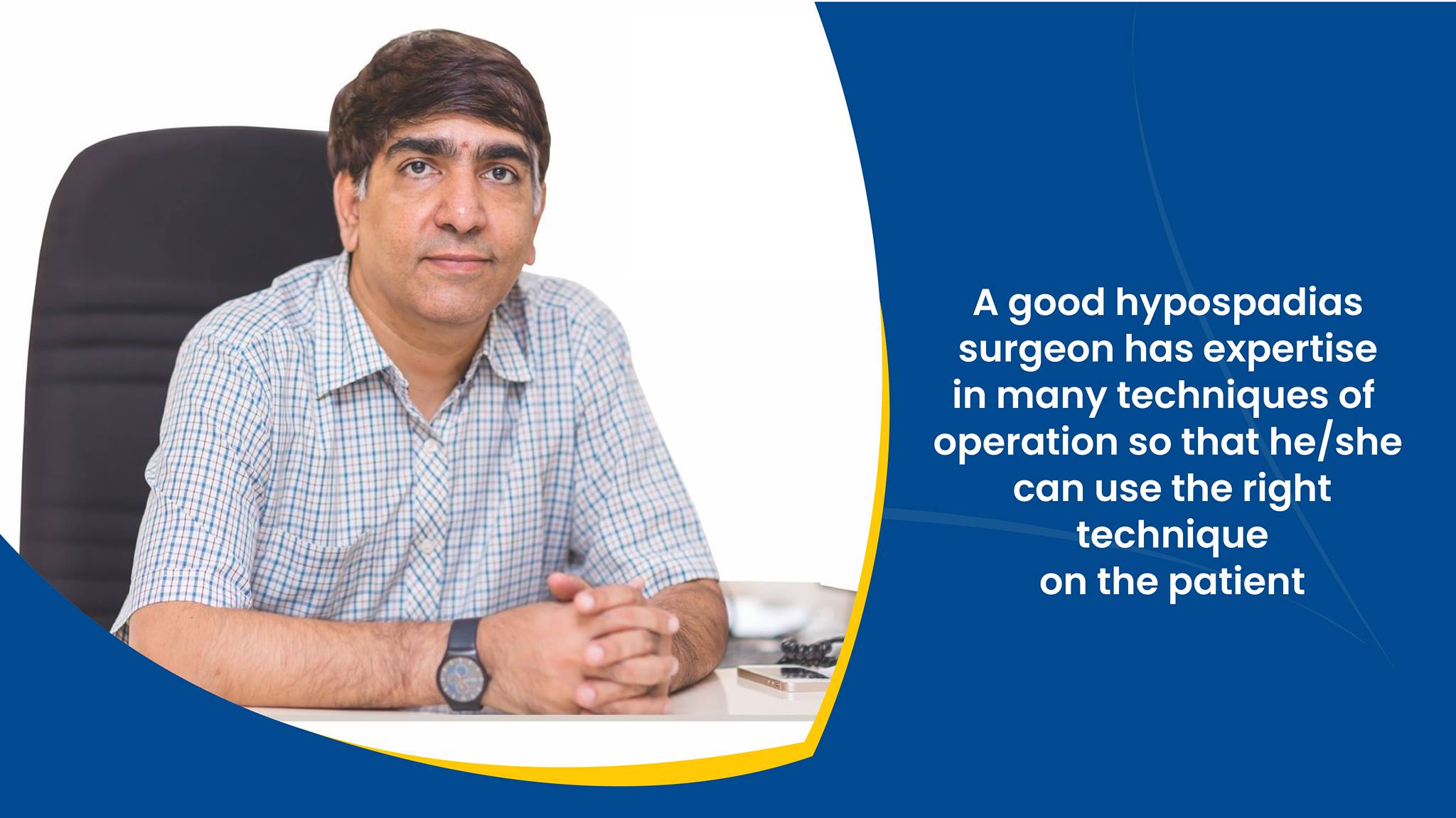 There are several techniques for single-stage hypospadias repair. A good hypospadias surgeon (hypospadiologist) has expertise in many techniques of operation so that he/she can use the right technique in the patient. There is so much variation in the type of hypospadias that no technique is suitable for all types of hypospadias. Choosing the wrong technique can result in failure of the operation and can result in serious complications. Urethral advancement (DRAG technique), Duplay operation (with or without TIP modification), Mathieu operation and Onlay island flap repair are some of the common techniques used by us for single-stage repair of mild to moderate hypospadias. Each of these techniques have specific indications and are suitable for specific anatomical situations. For example, in hypospadias with a poorly developed, narrow urethral plate, Duplay/TIP is not suitable; DRAG and Mathieu are not suitable in hypospadias with thin (hypoplastic) urethra. Thus, the expert hypospadiologist, who is well versed with many techniques, their advantages and limitations, chooses the most appropriate technique that is most suitable for the child’s hypospadias defect. This decision is usually made at the time of the operation, when the surgeon has the best chance to assess the hypospadias defect and the tissue availability accurately. Good results can be expected only when the best suitable technique is used for the operation. Using a single, seemingly easy operation in all cases leads to major complications in most cases.

Post-operative care of the Child After Single-Stage Hypospadias Repair 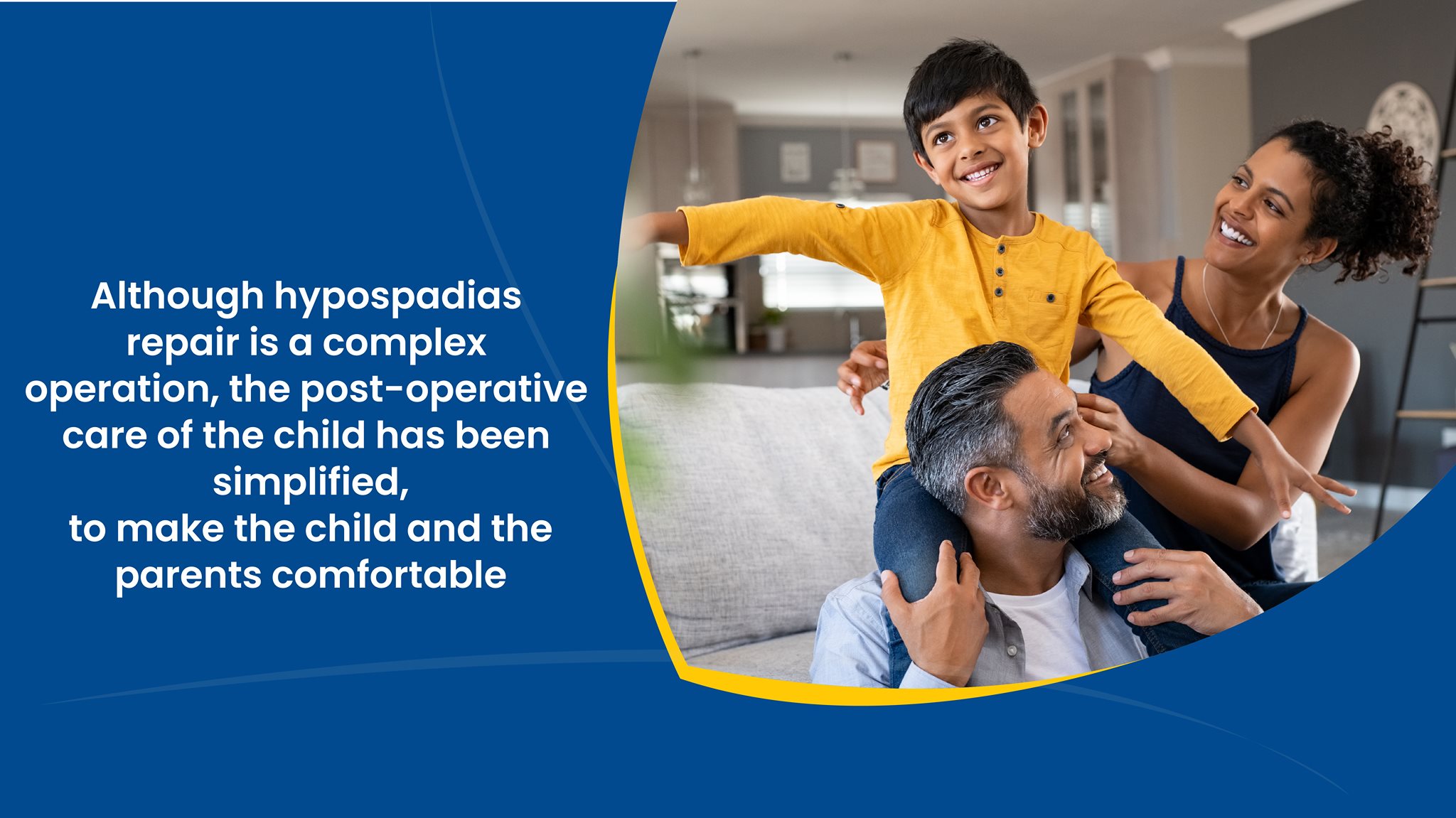 Although Hypospadias repair is a complex operation, the post-operative care of the child has been simplified, to make the child and the parents comfortable. At the time of the operation, a catheter (tube to drain urine from the bladder) is inserted, and a dressing is applied on the penis. The general care of the child after hypospadias surgery is as follows:

The child is usually discharged in 24 hours after the operation, once he is feeding well and the parents are comfortable managing the child in the diapers. There is no restriction in the diet or regular activity of the child. However, sleeping on the tummy and regular bath are avoided till the catheter is removed. The child is brought to the clinic again after 1 week, when the dressing is removed and the penis is inspected for healing. The catheter is removed anytime between 1-2 weeks after the operation depending on the type of the operative procedure and the healing of the wound. Once the dressing is removed, an antibiotic cream is prescribed to be applied to the wound once/twice a day by the parents. After the catheter is removed, all medications are stopped and the child can bathe normally. Sitz bath and antibiotic cream application are prescribed for a further 2-4 weeks. The child is seen in the outpatient clinic at 2-4 weeks, 3 months, 6 months and 1 year after the operation. After that, a yearly follow-up is advised.

The post-operative complications of hypospadias repair will be discussed in another blog.